I am happy to announce that my book Magento Product Types: Developer’s Guide is now available as PDF and EPUB on Leanpub! I have long been promising a version other than Kindle, and now there it is: 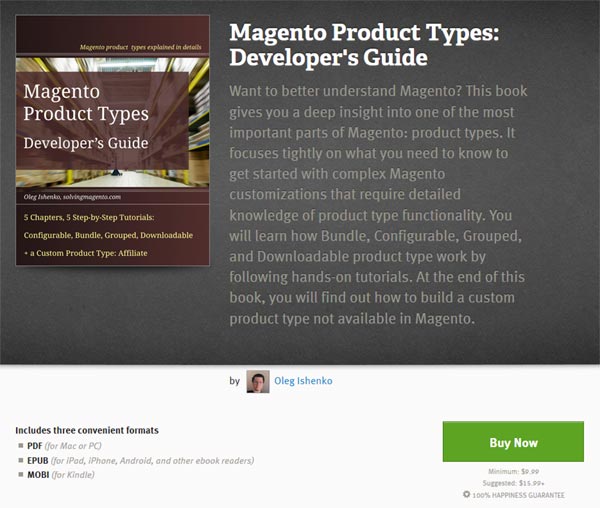 Leanpub offers a .mobi (Kindle) version as well. I still recommend getting the Kindle-formatted book from Amazon, which I have carefully tested. The Amazon links are in this post: Magento Product Types: Developer’s Guide

Your comments and Magento Questions

One of the most rewarding parts of blogging is getting comments and being asked questions on my work. Unfortunately recently I’ve been unable to quickly respond to your comments and give advice on your Magento problems. Currently I am deeply engaged in a startup and this takes all my time. For this reason I must recommend you to post questions on Magento StackExchange – the community there will help you faster and better than I ever could. I’m sorry, I’m not as available to my readers as I wished I would.

In my post A Magento File Custom Option Type Primer I’ve talked about how file custom product options are handled in Magento. One of the readers posted a comment there asking if there was an alternative to manually adding custom options to existing products. For such a task I can recommend MAGMI, Magento Mass Importer, which was used in one of my projects to import product data including custom options. Another solution would be writing a script which could dynamically add custom options to a set of existing products. In this post I will show you how to create such script.

First, let’s see how custom option data are written to database when a product is saved. The product model class Mage_Catalog_Model_Product has a protected method _afterSave which is called, as the name suggests, after a product model is saved.

END_OF_DOCUMENT_TOKEN_TO_BE_REPLACED

In this post you’ll find a list of likely reasons to why your catalog price rules do not have any effect on prices of products they are supposed to control. The problems listed below are most likely to occur without being caused by a custom module, i.e. it is assumed that catalog price rule functionality has not been changed. The reasons are not mutually exclusive and it is possible that more than one applies to your case. If you, however, find a reason not listed here, please post it in the comment section. This would be much appreciated. So, to the list:

END_OF_DOCUMENT_TOKEN_TO_BE_REPLACED

Reinventing the wheel – what a cliche! Of course you don’t do it, at least not intentionally. And you hate being reminded of code reuse on those rare occasions when someone points to a function you wrote, which allegedly does the same as some other function somewhere in the framework. Yet it happens. Sometimes looking for blueprints for the wheel takes longer than hacking it out yourself. Sometimes you might do it just for fun. And sometimes you simply don’t know a ready solution exists buried in some obscure location in your framework. Magento is no exception – it does have some functionality left there by the core programmers, which is used extensively by the system and yet often overlooked by us, shop maintainers and extension developers.

A few such gems can be found in app/code/core/Mage/Core/functions.php. This file contains no class definition but globally available functions. This file is included early in the application initialization stage in app/Mage.php. Some of its functions may be of little use when developing extensions, since they do core system work. But some can come in handy whenever a trivial task presents itself and you have to:

1. Find out if a Directory is Writable in Magento

It is a true rarity, a Magento shop running on Windows. Still, improbable not impossible. Assuming you are in a Linux environment, this task can be easily accomplished by calling is_dir($path) and is_writable($path). Not so simple with Windows hosts. The function is_dir_writeable($dir) does some additional checks for such cases – by literally trying to write a file into the directory being checked. This function is used by Magento when checking writability of certain paths during a shop installation before creating var, tmp and cache directories. Obviously, it is a well-proven approach – why not use it?

A neat shortcut to generate a MySQL-compatible date string, meet now($dayOnly=false). Leave the $dayOnly empty or set to false to get a Y-m-d H:i:s-formatted string, otherwise it will output a short Y-m-d representation of the current date.

3. Recursively Delete a Directory in Magento

Ever needed to delete a deeply nested directory structure? Use mageDelTree($dir). Magento uses this function to, for instance, clear user sessions when they are stored on disk.

4. Find out if a Class exists in Magento

If you need to make sure an external dependency is available in your installation, check it with mageFindClassFile($class), where the $class parameter is a class name, e.g. ExtPackage_ExtModule_Model_Classname.

5. Use an Extended Version of ucwords

This nifty little function does the same as the regular ucwords. And more! If you need to uppercase words in a string that is separated by characters other than whitespace – you can save some extra lines of code here. Say, you have a string modulename_model_classname. Converting it into a valid Magento class name will require just one call:

This function can also swap separators. So if there is a string modulename/model/classname it can be converted into a valid class name by calling:

6. Parse a CSV String in Magento

Now this kind of task comes fairly often. This function will save you time writing a parser – even if such is simple and takes a minute. But why bother if the function already exists? And it can handle quoted values as well. Check it out:

The last parameter, however, is redundant and used nowhere in the function.

Your work on a new module usually begins with a tedious task of creating the basic folder structure. You go to your app folder, cd to code, then to local, then to you working package directory. You add module folder and then etc, Block and Helper. Before you actually get to programming you logic you have to add and edit config.xml, helper.php. And when you are done and ready to fire the first test you remember you forgot to add an xml module file to app/etc/modules.

Its fairly easy to write a shell script for Linux that would do all this dull work for you. But for those who work in Windows (I do) automating this task would mean diving into decades old DOS scripting to create a bat file. Fortunately there is a better alternative: PowerShell. This object oriented scripting framework was first introduced in 2006 and since then had evolved into an incredibly nifty tool for every advanced Windows user.

After some tinkering I was able to produce a script that offers GUI to enter destination app folder, package and module names and creates the basic folder structure and essential files in no time. No installation required: download, unzip, and double-click!

Download it now, its free to use, modify and distribute:

It is surprising how many people don’t know about symbolic links and do not realize how useful they can be. For instance you are running a test server with multiple instances of out shop configured as separate installations. You can easily update the source code by pulling it from a common repository. But what if you need to update you media files, which normally are not under version control? And what if there are tens of gigabyte of them? You don’t want to copy the files to each installation, instead copy them into one folder and set up symbolic links for the media folders of your test sites:

When working with a multistore environment it is often necessary to setup several virtual hosts whose configuration is essentially the same apart from one or two settings. Instead of copying and pasting each configuration twice (do not forget about the SSL) one can use a third party extension for Apache web server called mod_macro. This module allows you setting up templates (macros) of your configuration. Your actual vhosts entries will contain references to these templates providing values for variables you defined.

Installing mod_macro on a Ubuntu server is simple by running the apt-get utility:

Alternatively, download the module and perform a direct installation as described here.

Consider you have to configure two shops running from the same installation. You want them to have two different top level domains (myserver.com and myserver.de) and keep logs separate.
Create a new virtual host configuration file under /etc/apache2/sites-available/ and create your template as follows:

Also set up an SSL macro:

Advantages of using mod_macro are self-evident:

More information on mod_macro can be found here.

This website uses cookies to improve your experience while you navigate through the website. Out of these, the cookies that are categorized as necessary are stored on your browser as they are essential for the working of basic functionalities of the website. We also use third-party cookies that help us analyze and understand how you use this website. These cookies will be stored in your browser only with your consent. You also have the option to opt-out of these cookies. But opting out of some of these cookies may affect your browsing experience.
Necessary Always Enabled
Necessary cookies are absolutely essential for the website to function properly. This category only includes cookies that ensures basic functionalities and security features of the website. These cookies do not store any personal information.
Functional
Functional cookies help to perform certain functionalities like sharing the content of the website on social media platforms, collect feedbacks, and other third-party features.
Performance
Performance cookies are used to understand and analyze the key performance indexes of the website which helps in delivering a better user experience for the visitors.
Analytics
Analytical cookies are used to understand how visitors interact with the website. These cookies help provide information on metrics the number of visitors, bounce rate, traffic source, etc.
Advertisement
Advertisement cookies are used to provide visitors with relevant ads and marketing campaigns. These cookies track visitors across websites and collect information to provide customized ads.
Others
Other uncategorized cookies are those that are being analyzed and have not been classified into a category as yet.
SAVE & ACCEPT
Theme: Esquire by Matthew Buchanan.